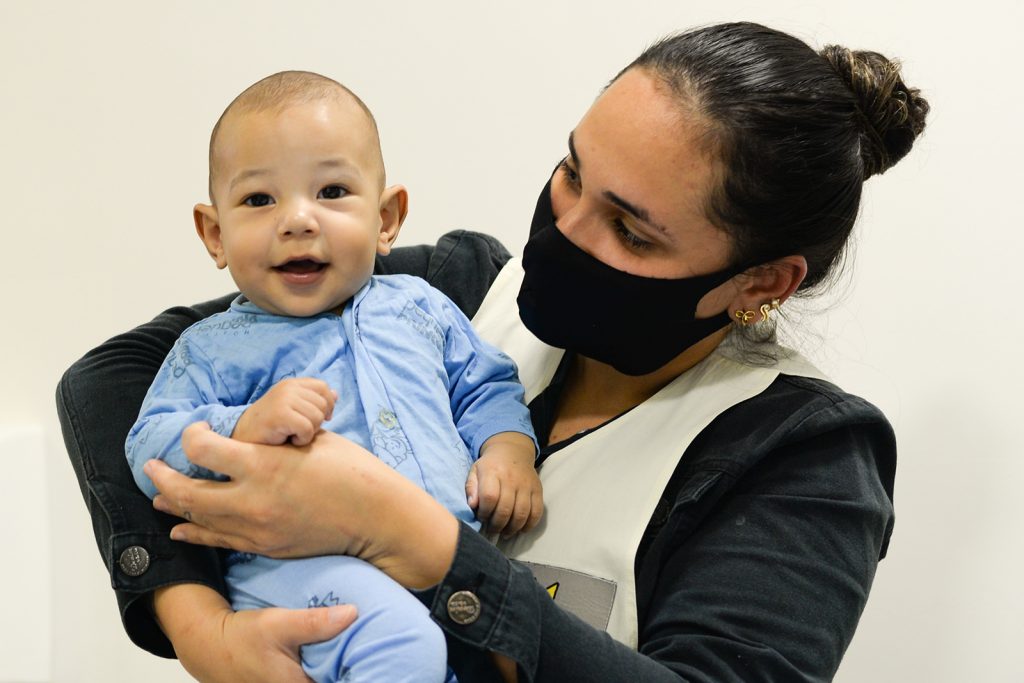 Gabriel Carvalho Domingues is only 6 months old and is already a winner. The boy was born with a severe congenital heart disease – transposition of the great arteries (TGA) and interventricular communication (IVC, with small right ventricle in the diagnosis), but his diagnosis was late. “He was already almost 2 months old when the doctor suspected his difficulty in breathing and asked for tests,” says his mother, Geissebel Flávia Carvalho Silva. With an inconclusive diagnosis, the boy, who was born in Guaratuba, on the coast of Paraná, was referred to Pequeno Príncipe Hospital.

“When we arrived here, the doctors informed me that the case was very serious. He had a catheterization and a banding [surgical correction to force the development of the ventricle, which was small]. Now, at 6 months of age, he had another catheterization, to verify if the surgery to correct the great arteries could be done,” explains his mother. “Fortunately, the second catheterization showed that there was ventricular growth. With this, we discussed with the team about the surgery for definitive correction, which will give him the opportunity to develop normally,” informed the cardiologist Cristiane Binotto.

Gabriel’s second catheterization was the 15,000th exam performed by the Pequeno Príncipe’s Hemodynamics Service. And in the sixth edition of the Pequeno Príncipe News in 2021 you will learn more about these procedures performed at the Hospital, whose Cardiology Service is a reference in the treatment of patients with congenital cardiopathies. Another article shows the results of a study developed by scientists from the Pontifical Catholic University of Paraná (PUCPR), in partnership with researchers from the Pelé Pequeno Príncipe Research Institute, which concluded that COVID-19 can compromise the placenta of pregnant women, causing premature births and even intrauterine death. The study was published in the journal Frontiers in Immunology, a scientific journal of worldwide reference in immunology.

Click here and read the full-length articles in the sixth edition of the Pequeno Príncipe News in 2021.